Originally from Iceland , Aron began his diving career in 2002. Since then he has traveled extensively and undergone dive training in a wide variety of world class locations. Aron is a Trimix instructor, Sidemount and Advanced Gas Blender Instructor with specialty in deep underwater videography where he trains industry professionals to film at depths up to 100m.
Aron was the videographer, expedition diver for Expedition Iceland – Project Hamilton in June 2011. The team managed to beat the Icelandic depth record twice in two weeks, discover a previously unknown hot spring system at 70 meters and be the first team to dive the US Coast Guard Cutter Alexander Hamilton since it sank 30 miles outside Reykjavik 70 years ago. Aron also is a support divers for record breaking dives, regularly being deep support at depths between 70-120m. Aron also have commercial diving experience working in Scotland, where he spent 2 years in commercial diving. 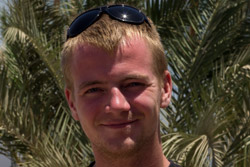